Being a Writer is Easy…

Back in the fifties, long before I was born (no, much longer than that!), my dad was pretty good with cars. He wanted to set up his own garage fixing, and maybe selling, them. He approached the council who agreed to sell him a plot of land, and even agreed to move lampposts to improve vehicular access.

And then he had second thoughts and backed out. That decision haunted him for the rest of his days. What if…

I’m pretty sure there’s nothing quite so corrosive as regret. So I try my best not to have any. I still do though: I don’t speak in public (too shy); I don’t hang-glide (scared of heights); I made the wrong choice in women (now corrected); I started smoking (now stopped); I began writing.

What? Writing is a regret?

Yes, of course it is. Well, let me qualify that. The word writing, in this instance, refers to the whole ensemble: writing; editing; making covers; organising beta readers; sorting out the website (or not, as the case may be); taking the plunge with an Audible book; sorting out the accounts; paying the business bills; and a thousand other things. That’s ‘writing’.

And I regret writing because I have become obsessive about it. Truly, I have. I have just put the finishing touches to my latest novel, CSI Eddie Collins’s fifth outing: The Death of Jessica Ripley. Well, I’ve just re-organised some of the chapters this evening, after spending every spare minute over the last two weeks making the corrections suggested by my editor (two whole weeks!). And now it’s out with a special reader to make sure it’s not total shit. Fingers crossed. I won’t settle until it’s back. In the meantime, I should be doing some marketing because I’m skint. But I don’t want to. For the last month or two I’ve had a new story circling inside my head like a buzzard waiting for Ripley to pass away. And I’m mad keen on making a start – itchy fingers.

All this and I have a very full time job and a family.

While I’m at work, I’m thinking about the story, and I’m thinking about writing (see the definition above), and although I still give 100% to the victims I work for, I possibly give a little less to the other office-based aspects of my job.

And my family? We went to the flicks last week to watch How to Train Your Dragon 3. Great film, but I was thinking about my new story through most of it.

That’s why I regret being a writer. If I was normal, i.e. – not a writer, I’d give 100% in the office at work, and I’d have understood why the dragons in the movie left town (sorry if that was a spoiler). If I was normal, I’d be downstairs right now watching Hunter Killer – it’s a DVD that I bought almost three weeks ago. It’s unopened on the shelf along with D-Day, a Steptoe & Son box set, and the three Formula One races I haven’t been able to watch this year.

So, you feeling sorry for me yet?

Don’t. Truth be told, I wouldn’t have it any other way. I love writing. Let me say that again – I LOVE WRITING, and all the peripherals too (except marketing, urgh!).

And while I play a full role in this alter-career of mine, you’ll remember that I dipped into becoming an author for a publishing house of note a few years ago. The relationship didn’t last, and I’m back doing it all by myself, and have been since January. In the three months since I returned to the soft bosom of indie-land, I’ve re-uploaded six books not only to Amazon but to Kobo and another distributor; I’ve taken the plunge and had a wonderful narrator (Collen MacMahon) bring The End of Lies to life; I’ve published The Lock, and have all but finished The Death of Jessica Ripley. I have been seriously busy. But I still haven’t got back on the marketing bike yet – it’s why I’m skint.

So although it might look to some as though the publishing house excursion was a disaster, it wasn’t really. You see, I can tick it off; I can shove thoughts of publishers so far to the back of my mind that they’re in danger of falling off the edge. I built my garage and got the council to move the lamp posts. The partnership might have failed, but guess what – that’s fine, because now I know how that chapter in my life turned out instead of wondering, instead of regretting.

Someone recently asked me how I manage to overcome the shite and become a successful author.

Firstly, I don’t know what their definition of successful is, but it’s not me. I’m just an average arsehole, and likely as not will stay that way until I curl my toes up. But it’s not for the lack of trying. Let me be honest with you here; remember that bit in the paragraphs above where I growl about being obsessive about writing when my inner self wants to go downstairs and watch Steptoe & Son, but can’t? Sometimes I wonder why I bother with the struggle. Why don’t I just watch the damned film, enjoy the movie, participate at work? Why must I battle all the time?

There’s probably a good job for a psychoanalyst in me somewhere.

Sometimes I really give serious consideration to packing it all in – because it is a hell of a lot of work, and it’s a hell of a lot of work consistently. It never ends. And it wears me down. And the guilt I feel for foregoing all the other things in life, as well as neglecting the kids, the wife, the lawn, the friendships… constantly, makes me think that I have given it my best shot and I’ve still come up short; that it’s time to bow out gracefully, pull the Facebook plug, and turn off the Amazon light.

I’d be no worse off if I did. In fact, with all the monthly bills this little empire of mine costs to run, I’d probably be better off, and I’d get my life back, and the kids would get a father who was focused on them instead of staring off into the distance thinking about story and character development.

I guess about now you’re waiting for the punchline or the fairy-tale ending, the motivational slap around the face, or the ‘Aha, I got you!’ line. Well, there isn’t one.

I was writing stories long before making money on Amazon was an option – at least 15 years before, actually. I was writing them to become an author for Hodder Headline (or whoever), and when that bit the dust, I was writing them for me. I loved writing (and I still do), and I’d given up on the dream of ever earning money from it. Back then I did it because I enjoyed it, and I was okay-ish at it. That is the mark of a pure writer*. All the Amazon stuff is sparkly bollocks – but don’t get me wrong, I’d still like to make a million or two like some authors have – and if I did, I’d bin the day job and spend even more time neglecting my family (d’oh!).

If I made no money at all, and I’m quite close to that particular target just now, I would still write.

So perhaps those words ‘successful author’ do apply to me after all: I have written books, and I have enjoyed writing them. Maybe this is where my true happiness lies; maybe this is what I was born to do. Yeah… I’ll take that, thank you.

*Though aiming to make money by selling books does not make you an evil person!

Thank you so much, Andrew!

What a brilliantly honest piece this is and I’m certain it will help other authors realise that they aren’t alone when it comes to all those things we have to give up just to find the time to sell one book.

You can find out lots more about Andrew by following his social media accounts: @AndrewBarrettUK

Want to know about his latest book? 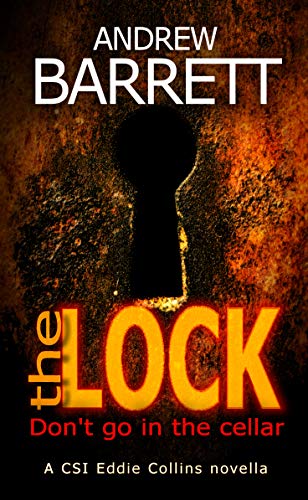 I’m Eddie Collins, a CSI. This is the story of how I saw a dead man die.

I was finishing up at a sudden death in an old house, waiting for the body snatchers to arrive, when I heard a noise from the cellar.

I had time to kill, so I went to investigate.

Turns out I wasn’t the only one with killing on his mind.

If you like fast-paced crime thrillers with a forensic slant, raw emotions, and characters that reach out of the book and grab you by the throat, you’ll love Andrew Barrett’s CSI Eddie Collins series.

To find out what’s in that cellar, buy The Lock today.

Do you like your crime thrillers to have a forensic element that adds to the realism? Do you like your lead character to be someone intense and unafraid to take on authority?

Andrew writes precisely that kind of crime thriller, and has done since 1996, about the same time he became a CSI in Yorkshire.

He doesn’t write formulaic fiction; each story is hand-crafted to give you a unique flavour of what CSIs encounter in real life – and as a practising CSI, he should know what it’s like out there. His thrillers live inside the police domain, but predominantly feature CSIs (or SOCOs as they used to known).

Here’s your chance to walk alongside SOCO Roger Conniston and CSI Eddie Collins as they do battle with the criminals that you lock your doors to keep out, fighting those whose crimes make you shudder.

This is as real as it gets without getting your hands bloody.

Find out more about him at http://www.andrewbarrett.co.uk where you can sign up for his newsletter and claim your free starter library.