I’m Trevor Lince and believe it or not I have only ever read eleven books in my life. About three years ago I had a series of dreams and after banging on about them over dinner to anyone who would listen, in Jan 2017, I decided to write a novel.

Published Room 119 in December 2017. The Funicular is almost done should be out by June.

Did I have another choice? To be honest, I have a good job so a spare time thing really which appears to have taken over my life.

Freedom and making your own calls.

The constant self-promotion on social media to even get one sale.

Great question, I would have done lots different not the book, but I would have been a lot more active before the launch and had a bigger social media presence takes ages, growing now though.

Nothing really, better description and subtitle to use keywords to target amazon searches I suppose.

Maybe a bit about getting reviews, look after your bloggers and get on fab sites. And interact, people like you to join in their stuff too. It’s not all about you.

Nothing more, really. I quite enjoyed it … I am an IT geek though.

You can keep up with Trevor’s news by following his social media accounts:

Huge thanks for joining me, Trevor! Best of luck with the rest of your journey. 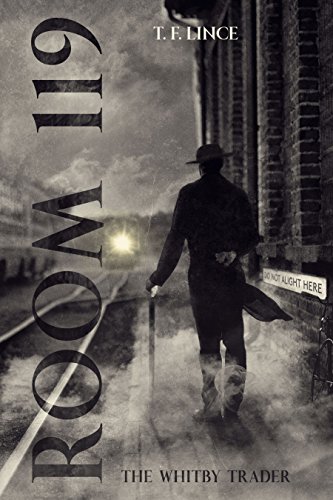 High-flying trader Dean Harrison has it all – the London penthouse apartment; the fast car; the beautiful wife. But when the threads of Dean’s life start to unravel, they do so with alarming speed.

Following the advice of a frail stranger, Dean sets off for Welnetham Hall Hotel and is plunged into the mysterious world of Room 119 – a world where nothing makes sense. How does everyone in the hotel know his name? Why does he travel there on a train line that shut down over fifty years ago? And who is the sinister man in black who pursues him wherever he goes?

As he gradually pieces together the puzzle of Welnetham Hall, Dean is forced to re-evaluate his life and realises that nothing is more important to him than his wife and daughter. Desperate to get back to them, he vows he would lay down his life for the people he loves.

It’s a promise he may have to keep.

Trev Lince originates from Marske-by-the-Sea on the north-east coast of England, but now lives in Darlington with his wife, Claire. Their daughter, Annie, is a very good guitarist and is setting up a band, playing every pub in the north-east that she can. She’s so rock and roll, living the dream while her father is approaching his mid-life crisis. A keen golfer and frustrated Middlesbrough FC fan, Trev gets to as many matches as work and leisure time allow. He writes in what little spare time he has, when not working as an IT Consultant for a major oil company in Surrey. Room 119 – The Whitby Trader is Trev’s first book and he really enjoyed the experience of writing it. Who knows? He may have a few more stories bursting to get out of his head. He would like to thank you for reading his debut novel.