Today I welcome self-published author, Nick Rippington to the blog so that he can share his writing journey.

I’m Nick Rippington and I have two books self-published.

Tell us about where you are on your self-publishing journey right now in terms of books publish, where you publish etc.

I have published two UK gangster crime novels. The first Crossing The Whitewash I did with Createspace, Lightning Source and KDP but didn’t use select. Later I expanded distribution to Kobo, Nook and iBooks. Spark Out, the prequel, also went on Createspace and Lightning Source but to avoid sales confusion I used the same IBSN – My own. This time I put it on select which got lots of page reads while a free promo period took it to No1 in an Amazon chart. I took it out after 3 months and published again with Draft 2 Digital. Not sure if I’ve had one sale yet on their platforms.

I went to a conference and took away lots of tips. I didn’t want a 2 year delay between writing and getting published or to go through the whole slush pile farce again.

You are in control and can keep marketing long after a trad publisher stops.

Not being recognised by big book store chains.

Try not to pay out too much on everyone who makes wild promises about promoting your book.

I would have started earlier.

It will cost you money but do it right. Get an experienced cover designer, structural editor and proofreader. Listen to those who have done it before.

You must market and promote on new forums like Facebook and Instagram and make sure you budget accordingly. Don’t give up on your work but don’t publish until it’s the best it can possibly be.

You can keep up with all Nick’s news by following their social media accounts:

Nick’s latest novel, Spark Out is available over at Amazon: 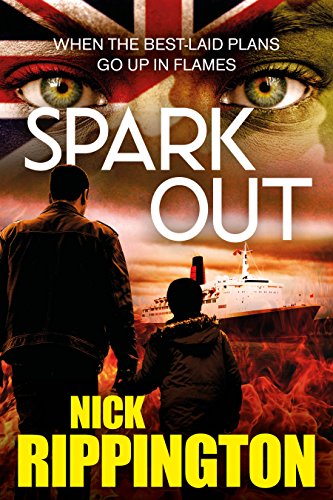 HARD MAN Big Mo rules family and friends with a rod of iron.
From his base on a rundown London council estate, he is driven by a desire to emerge from the shadow of his career criminal father and make a name for himself.
When a warehouse raid turns up more than he bargains for, Big Mo finds himself in possession of the weapons he needs to transform himself from petty criminal to big-time armed robber.
But as he plans the ultimate raid, Prime Minister Margaret Thatcher orders British troops – including Mo’s younger brother Clive – to fight a war in the Falklands.
Suddenly the light Mo sees at the end of the tunnel becomes a spark threatening to blow his whole world apart.

NICK RIPPINGTON is the award-winning author of gritty UK gangland thrillers. His debut novel Crossing The Whitewash received an honourable mention in the 2016 Writers’ Digest eBook awards with judges describing it as “Evocative, unique, unfailingly precise and often humorous”. The second novel in the Boxer Boys series, Spark Out, is a prequel which won a Chill With A Book award with readers describing it as a “Fantastic Read”, “Compelling” and with an “unexpected twist”. A former Welsh Sports Editor of the News of the World, Nick started writing the series after being made redundant with two days notice after Rupert Murdoch closed down Europe’s biggest-selling tabloid six years ago. He lives in London with wife Liz and has two children – Jemma and Olivia.