Conrad Jones is one of the most successful self-published authors I know. With nineteen books under his belt and another one not far from publication, he is certainly one author who you need to be watching if you’re looking to start this journey. Conrad joins me today to share his writing journey …

Conrad Jones. I started my first book in 2007

Tell us about where you are on your self-publishing journey right now in terms of books publish, where you publish etc.

I have 19 novels published. 17 of them are Self-published and 2 are with a publisher. I have 2 more scheduled for 2018, one will be sent to my publisher, the other will be self-published.

It is a financial decision for me. I have had agents and traditional publishers over the years, and they cannot do anything for me that I can’t do myself. I’m on a 70% royalty online as opposed to 12% with a traditional house.

The money. I get paid monthly and have the flexibility to change prices, run promotions and giveaways as and when I want to.

I’ll never see my books in the airport bookshop!

Editing is king! Finding a good editor/ proofreader is everything. (I happen to know that Conrad’s editor is pretty awesome … It’s ME!!)

I would have used a professional editor from day one.

Do it! Make sure your work has been through several sets of eyes for proofing and been edited. Make it as perfect as you can. Do not rush it just to get it out there.

When I first published a novel, the first question everyone asked was, ‘who is your publisher?’ … there was a huge stigma around self-publishing but that is gone now. I have written 20 full-length novels and sold over a million books with thousands of five-star reviews, something I could only dream about in 2008, when I was desperate to be anything but self-published. Do I wish I was published by one of the big six publishing houses? Not unless they could pay me monthly and match my royalty deal, which will never happen. So, I guess I’ll never see my books in an airport bookshop. I can live with that because being self-published has given me the opportunity to be at the airport. Right now, I wouldn’t change a thing. If you are beginning your journey as an author, I wish you the very best of luck. You will need a thick skin and a lot of luck. Make your own luck, self-publish and see where it takes you!

You can keep up with all Conrad’s news by following his social media accounts:

The renovation of a remote farmhouse on the outskirts of Liverpool uncovers a chamber of horrors but the crimes are historical. DI Alec Ramsay must sift through the evidence to identify both the victims and the perpetrators, while trying to dismantle the dangerous drug gangs that plague the city. The prequel to The Child Taker, this book is a must for fans of the Alec Ramsay series.

You can also grab your copy of Shadows over at Amazon …

Do you love hard-boiled and utterly gripping crime thrillers? From the best-selling author if Brick, comes the unmissable Shadows.

DI Braddick is put on the case when a hijacked drug deal has resulted in murder and an eye witness goes missing. When victims are discovered strung up from the rafters of an abandoned fish factory, on the Anglesey coastline, the police are baffled as to what went on. A deserted trawler found at the scene helps Braddick put the pieces together.

Could this be the work of a notorious Russian crime family?

When an undercover officer goes missing everything points to an informer for the family and it is clear they will stop at nothing to the silence the leak and have their revenge.

Trust me folks, you want to buy these books! They are utterly brilliant! 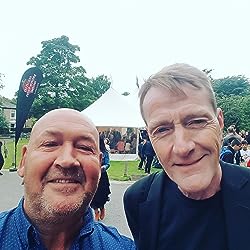 Conrad is the author of 19 novels, 8 author guides and 2 biographies. He has three series;
The Detective Alec Ramsay Series; 7 books Gritty Crime Thrillers
The Soft Target Series; Gritty Thrillers 6 books (Reacher Style)
The Hunting Angels Diaries; 3 books Horror Thrillers
You can find out more and get a free ebook thriller at; https://www.conradjones.website

I am Conrad Jones a 50-year-old Author, originally from a sleepy green-belt called Tarbock Green, which is situated on the outskirts of Liverpool. I spent a number of years living in Holyhead, Anglesey, which I class as my home, before starting a career as a trainee manger with McDonalds Restaurants in 1989. I worked in management at McDonalds Restaurants Ltd from 1989-2002, working my way up to Business Consultant (area manager) working in the corporate and franchised departments.
On March 20th 1993 I was managing the Restaurant in Warrington`s Bridge St when two Irish Republican Army bombs exploded directly outside the store, resulting in the death of two young boys and many casualties. Along with hundreds of other people there that day I was deeply affected by the attack, which led to a long-term interest in the motivation and mind set of criminal gangs. I began to read anything crime related that I could get my hands on.
I link this experience with the desire to write books on the subject, which came much later on due to an unusual set of circumstances. Because of that experience my early novels follow the adventures of an elite counter terrorist unit, The Terrorist Task Force, and their enigmatic leader, John Tankersley, or `Tank` and they are the Soft Target Series, which have been described by a reviewer as ‘Reacher on steroids’ ; You can see them here;
http://www.amazon.co.uk/Target-Series-Length-Mystery-Thrillers-ebook/dp/B00JEN607Q

I had no intentions of writing until 2007, when I set off on an 11-week tour of the USA. The Day before I boarded the plane, Madeleine Mcann disappeared and all through the holiday I followed the American news reports which had little or no information about her. I didn’t realise it at the time, but the terrible kidnap would inspire my book, The Child Taker years later. During that trip, I received news that my house had been burgled and my work van and equipment were stolen. That summer was the year when York and Tewksbury were flooded by a deluge and insurance companies were swamped with claims. They informed me that they couldn’t do anything for weeks and that returning home would be a wasted journey. Rendered unemployed on a beach in Clearwater, Florida, I decided to begin my first book, Soft Target. I have never stopped writing since. I have recently completed my 15 novel, ‘Brick’, something that never would have happened but for that burglary and my experiences in Warrington.
The Child Taker was the 6th book in the Soft target Series but it also became the first book in the Detective Alec Ramsay Series when I signed a three book deal with London based publishers, Thames River Press. The series is now 7 books long with an average of 4.8 stars from over 2000 reviews. The first two books are always free with over 1100 5-star reviews. You can see them here;
http://www.amazon.co.uk/dp/B010DWH57K
As far as my favourite series ever, it has to be James Herbert’s, The Rats trilogy. The first book did for me what school books couldn’t. It fascinated me, triggered my imagination and gave me the hunger to want to read more. I waited years for the second book, The Lair, and Domain, the third book to come out and they were amazing. Domain is one of the best books I have ever read. In later years, Lee Child, especially the early books, has kept me hypnotised on my sunbed on holiday as has Michael Connelley and his Harry Bosch Series.