I am over the moon to welcome indie author, Robert Enright to the blog today. Rob is one of my favourite people in the world, he works so hard and spends lots of time encouraging and helping others, and he is ALWAYS smiling!

So, without further ado …

Robert Enright and I started writing my first book in Summer 2014 And self-published in early 2015.

Tell us about where you are on your self-publishing journey right now in terms of books published, where you publish etc.
I am in a really exciting place at the moment. I have just relaunched my book, DOORWAYS, and have the sequel launching in March this year. I’ve nearly finished a prequel Novella and then the 3rd book is hoping to launch by Christmas!
Why did you choose to self-publish?
At first because I knew nothing about the industry at all. Now, having been published and growing disillusioned by the whole process, I requested my rights back and want to know that 100% is going into my book!
What’s best thing about self-publishing?
I love being involved in all aspects. Organising blog tours, building my ad graphics, speaking to editors and bloggers. Every thing.
And the worst?
It does make the writing a little harder with having all of that to do. But I make it work. Just about.
What do you know now that you wish you’d known before you published your first book?
That people want to help. The job that bloggers do is amazing and they are so selfless with their support. I knew ONE book blogger when I launched One by One in 2015. Next week, my relaunch blog tour has 21!!
If you could change one thing about your self-publishing journey, what would it be and why?
I would have said not get published but doing that has lit a rocket underneath me so I am happy I did.
Do you have any advice for those who might be looking in to self-publishing?
Don’t be scared. I see so many people who think that being published is the be all and end all. Look at what can be achieved by those self publishing and just be willing to put the work in!
You can keep up to date with all Rob’s news by following him on his social media sites:
http://www.robertenright.co.uk
http://www.facebook.com/robenrightauthor
Https://twitter.com/REnright_Author
Anything else you’d like to share?
DOORWAYS has just been rereleased and the sequel, THE ABSENT MAN, will be released in March 2018!

Thank you for sharing your journey with us all, Rob and best of luck with the next book, I cannot blooming wait to read it!
Want a copy of Doorways? Of course, you do … here’s the blurb and just click on the cover to go to Amazon. 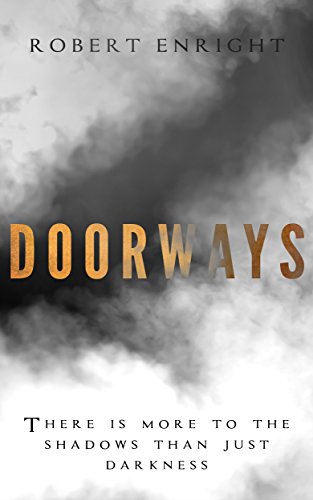 When will you discover The Otherside?

There is more to the shadows than just darkness

The Otherside is located at the fringes of our world, hiding in plain sight and existing within our shadows. Shielded from humanity, the Otherside is watched over by the BTCO, a highly secret government agency, whose members all possess ‘The Knack’, a genetic anomaly that allows them to see this other world.

Franklyn ‘Bermuda’ Jones is the BTCO’s finest agent, the only human to have passed to the Otherside and returned. Gifted with the ability to physically interact with both worlds, Bermuda reluctantly stands between both worlds, pining for the life he had to leave behind and the daughter he can no longer see. Teamed with Argyle, an enigmatic Otherside warrior, Bermuda is assigned the case of a missing woman who has vanished under mysterious circumstances.

As Bermuda delves further into the disappearance, he uncovers a threat that could destroy the truce between two worlds…and finds himself in a race against time to safeguard humanity’s very existence.

Discover a new world in this fast-paced urban fantasy packed with thrills, action and the odd one liner.

Born and raised in North West London and now residing in Hertfordshire, Robert Enright has been writing for over 10 years. His debut novel – ONE BY ONE – was self published on Amazon in March 2015, receiving critical acclaim and was nominated for Books Go Social Book of the Year 2015. The violent, revenge thriller gave Rob a path into crime fiction, but the constantly embraced geek within him went a different way. 2016 will see the release of DOORWAYS – published by Urbane Publications – the first in the Bermuda Jones series, a dark sci-fi about an agency dealing with the threat of a parallel world. He can’t wait to write the whole series – if he can put down his Xbox controller or his Nerf Guns!