I am delighted to welcome Kiltie Jackson to Creating Perfection today as she shares her self-publishing journey with us.

I’m Kiltie Jackson and my writing journey started with some little tiptoe steps approximately eleven years ago. I had written seventeen chapters of my book, although, not with the intention of doing anything with it, I just had a story in my head that I needed to write down. I then decided it was a load of rubbish and shelved it. Last year, 2016, I read about an author who had written a book to prove to her children that you can do anything you want to do, she self-published and went on to become a bestselling writer. This prompted me to pick up my previous work, blow the dust off and upon reading it again, I realised that it wasn’t rubbish after all and I finished the story.

I did not expect to have the same outcome as the author who had inspired me to return to writing but I don’t mind as I am loving just sitting down and pouring out the stories which come into my head. The fact that other people are also enjoying them is a lovely, surprising bonus

Tell us about where you are on your self-publishing journey right now.
I published my debut novel in September 2017 and I have just completed the first draft of my second novel. On this occasion I have, at this time, published only through Amazon and Createspace. Going forward, however, I will be looking at putting my work onto other sites such as Kobo, Nook and Apple.
Why did you chose to self-publish?
I’m not a young author and didn’t feel I had the time to wait several months, or maybe even years, for agents and publishing houses to decide if I was good enough. My mother was also very keen for me to self-publish. I suspect she may have felt that she may not be around to finally see me in print if I went the traditional route.
What is best thing about self-publishing?
The control over every aspect of putting your book out – from the choice of cover, to the word count. To how much or how little content you want it to have. No one telling you to change POV’s because ‘they’ prefer it that way.
What is the worst thing about self-publishing?
The marketing. Getting your name and work known. Having to continually self-promote is very difficult and trying to prove that, even though your work is self-published, it IS just as good as traditionally published work.
What do you know now that you wish you’d known before you published your first book?
How to get more people to see your book before release – getting reviewers on board and the organising of a blog tour. I’m much more prepared for the next one!
If you could change one thing about your self-publishing journey, what would it be and why?
Nothing! I learnt as I went along and everything happened at the right time for me. I was very lucky. I think if I had tried to be ‘up to speed on everything’ before I started, I doubt I would have ever done it as it can be quite overwhelming. Learning as I went worked best for me.
Do you have any advice for those who might be looking in to self-publishing?
It is hard work. Having all the control means the buck stops at you if anything goes wrong. You have to make all the decisions. Also, and most importantly of all, spend the money and get your manuscript professionally edited. DO NOT think you are good enough to do it on your own. When you have looked at your MS for a long time, you become ‘book blind’ and you WILL miss typos and errors. A good editor is totally worth the money.
You can follow Kiltie and her self-publishing journey through her various social media pages and website:
FB Page: http://www.facebook.com/kiltiejackson
Twitter: @KiltieJackson
Website: http://www.kiltiejackson.com
Amazon: https://www.amazon.co.uk/Rock-Roll-Lovestyle-Christmas-Romance-ebook/dp/B075BGT9BQ
Anything else you’d like to share, Kiltie?
When you hold the hard copy of your book in your hand for the first time, and you know that YOU are 100% responsible for its existence, it is the biggest buzz you will ever have!
Kiltie’s debut novel, A Rock ‘n’ Roll Lovestyle: A Christmas Romance is out now, here’s the blurb … 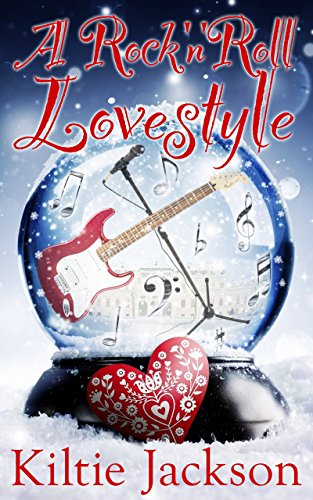 So who exactly is Sukie McClaren?

A Christmas-loving Cat lover? A Sound of Music Fanatic? A Fiercely Independent Woman?

She is all of the above. And when she is sent to Salzburg for a business trip a few weeks before Christmas, she thinks all her dreams have come true. As she packs her suitcase, the only things on her mind are Christmas markets, lots of snow and finally seeing the Doh-Ray-Me steps. Becoming the new best friend of the world’s hottest rock-star doesn’t even get a look in.

Pete Wallace is a reclusive, reluctant, rock-star and the world’s Number One, best-selling, male solo artist. It’s been three years since his last tour and he’s now preparing to go back on the road again. A week in Salzburg, schmoozing with the music press, is one of his worst nightmares.

He can’t wait for it to be over.

When Pete and Sukie meet, it is the beginning of a beautiful friendship. Lonely for too long, he begins to remember how it feels to be happy and, for the first time in six years, Christmas feels special again.

Eduardo di Santo however, whose kid sister suffered life-changing injuries at a Pete Wallace concert, is all set on getting revenge. When Pete’s new tour is announced, he begins to make his plans. Plans that will culminate in Pete’s demise.

Will Pete and Sukie’s new friendship die before it has a chance to flourish?

A Christmas tale full of love, laughter, friendship and revenge.

GET YOUR COPY HERE!
Thank you so much for sharing your journey with us today, Kiltie, I wish you all the success in the world for the future.
If you’re an independent, self-published author and would like to share your journey, please click this link.